For a satellite in orbit all resources are sparse and the most critical resource of all is power. It is therefore crucial to have detailed knowledge on how much power is available for an energy harvesting satellite in orbit at every time – especially when in eclipse, where it draws its power from onboard batteries. This os especially true for the power hungry demonstration CubeSat GomX-3 of our SENSATION industrial partner GomSpace. 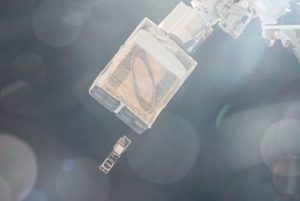 Deployment of GomX-3 from the ISS

GomX-3 is a 3 kg nanosatellite designed, delivered, and operated by Danish sector leader GomSpace in collaboration with the European Space Agency (ESA). It has been launched from Japan aboard the HTV-5 on August 19, 2015 and has made its way to the International Space Station (ISS). It has been deployed into orbit on October 5, 2015. GomX-3 has carried a vairety of instruments capable of  the following functions:

In addition, GomX-3 can receive in-space software updates from – and allows for telemetry data downlink to the GomSpace base station in Aalborg, Denmark via a software defined radio module.

In order to maximise utilisation of the CubeSat’s capabilities in space, a detailed understanding of its energy budget is mission-critical. A number of different circumstances make this issue non-trivial. While GomX-3 has solar panels on board for energy harvesting, the satellite passes into eclipse each orbit. Thus power is not used immediately as it is generated. Surplus energy is instead stored in a Lithium-ion battery pack and can thus be used to continue operation during eclipse periods.

Due to space and weight restrictions, the battery pack cannot be arbitrarily large – on the contrary, it is one of the heaviest onboard components and must therefore be relatively small. An operator of such a spacecraft is thus faced with a highly complex task when having to manually plan and command in-orbit operations, constantly balancing power and data budgets.

The POWVER research agenda has been to automatise the planning and commanding process, with the goal to maximize instrument utilization while minimizing battery depletion risk. This has required several technical innovations, including

For this purpose, the POWVER scientists have developed a rigorous representation of the battery behavior. Their stochastic kinetic battery model integrates capacity limits and provides means to quantify the accumulated risk of battery depletion under a probabilistic, timed workload process with noise.

A priced timed automaton representing a battery with linear dynamics

To accurately model the interplay of the power-relevant aspects of GomX-3, the POWVER team derives a network of priced timed automata (PTA) from the information, data and requirements provided by GomSpace engineers. The main component, the battery, is treated with simple linear dynamics due to the limitations of the PTA formalism. The structure of the automata and the cost annotations are kept purposely modular and generic so as to enable to quickly react to new or altering requirements or conveniently exchange entire components or optimization criteria.

The automata network serves as basis for generating executable schedules for GomX-3. These  are  computed by the tool UPPAAL CORA, which performs a cost-optimal reachability analysis on the given network. The resulting schedules are however potentially too optimistic due to the linear battery dynamics used in this step. Therefore an additional validation step uses the more realistic stochastic kinetic battery model. This two-step scheduling pipeline provides executable schedules which maximize instrument utilization, and estimates their risk of inducing battery depletion.

Visual representation of a schedule (left, bottom), its predicted and measured current evolution (left, middle), the predicted state of charge evolution and actually measured voltage (left, top) and the result of the validation step (right) including the depletion probability of the schedule.

To demonstrate the feasibility of our method, a multitude of POWVER-generated schedules were uplinked to – and successfully executed by GomX-3 in orbit, and eventually presented to the international astronautical community.

A simulation of GomX-3 performing a part of a schedule computed by POWVER technology.

This work received the best paper award at the 21st International Symposium on Formal Methods. It is a major activity of the ERC Advanced Grant POWVER. The nucleus of this work was initialized within and supported by the EU FP7 project SENSATION.