In response to the massive revelations around the diesel emissions scandal, the European Union has defined a new test procedure for Real Driving Emissions (RDE). In RDE testing, exhaust emissions of vehicles are monitored under realistic conditions while driven on-the-road, as opposed to lab conditions effectuated by fixing vehicles on chassis dynamometers and confronting them with driving profiles fixed a priori.

The work reported here revolves around the evaluation and examination of the RDE test procedure using formal methods. We provide an openly available version of our RDE formalization.  We see this as a pivotal starting point for wider reaching activities, enabling techniques to find out how much of actual road traffic is covered by the RDE regulation. As a nucleus for this, we show that it is possible to run RDE tests with low-cost equipment, and report concrete experiments carried out with an Audi A7 TDI.

The RDE regulation comes with broad certification conditions for tests conducted under real-world conditions, on public roads, and during ordinary working days. To this end, an (informal) specification document spells out precise preconditions a trip, i.e., a trajectory driving with a car in-the-wild has to satisfy to count as a valid RDE test. These preconditions contain various constraints on the route, allowed altitudes and speeds, and on the dynamics of the driving profile. Whenever a trip meets those preconditions, the emissions expelled during that trip must not exceed the respective emission limits. During a test, the relevant test data is obtained with a Portable Emissions Measurement Systems (PEMS) which is a lightweight emission laboratory in a box and can be carried with the vehicle under test. We formalized most of the RDE regulation using an extended version of the stream-based specification language Lola 2.0. We provide an openly available version of this formalization below which yields a runtime monitor when concretized for a test setting.

Our formalization of the RDE regulation yields a runtime monitor to detect RDE violations. However, still, rather expensive and complicated test equipment is required to obtain the relevant test data. To enable laypersons to conduct successful RDE-like tests we developed a low-cost variant of the RDE test procedure. The hardware costs of that system are in the order of $100, and hence affordable by a layperson. This compares favorably to the costs of a PEMS system, which are in the order of $250,000.

While the vehicle’s velocity and altitude can be determined via GPS with an ordinary smartphone, measuring emissions requires specific sensors. Fortunately, many modern cars with a Selective Catalytic Reduction (SCR) system are equipped with NOx sensors. The SCR system efficiently reduces the amount of emitted NOx by injecting urea into the exhaust stream which reacts with the NOx to water and atomic nitrogen. As part of the control-loop determining how much urea to inject, an NOx sensor in the after-treatment exhaust stream, i.e., the exhaust stream after it ran through the cleaning process as it leaves the tailpipe, is necessary. Using the standardized OBD-II debugging interface one can read out the values of this sensor. Every modern car is equipped with a standardized OBD-II debug port accessible to the user. Our prototype monitoring system comprises an OBD-II dongle which is connected to the vehicle under scrutiny, some additional sensors and a GPS module, as well as a Raspberry Pi running the monitor. 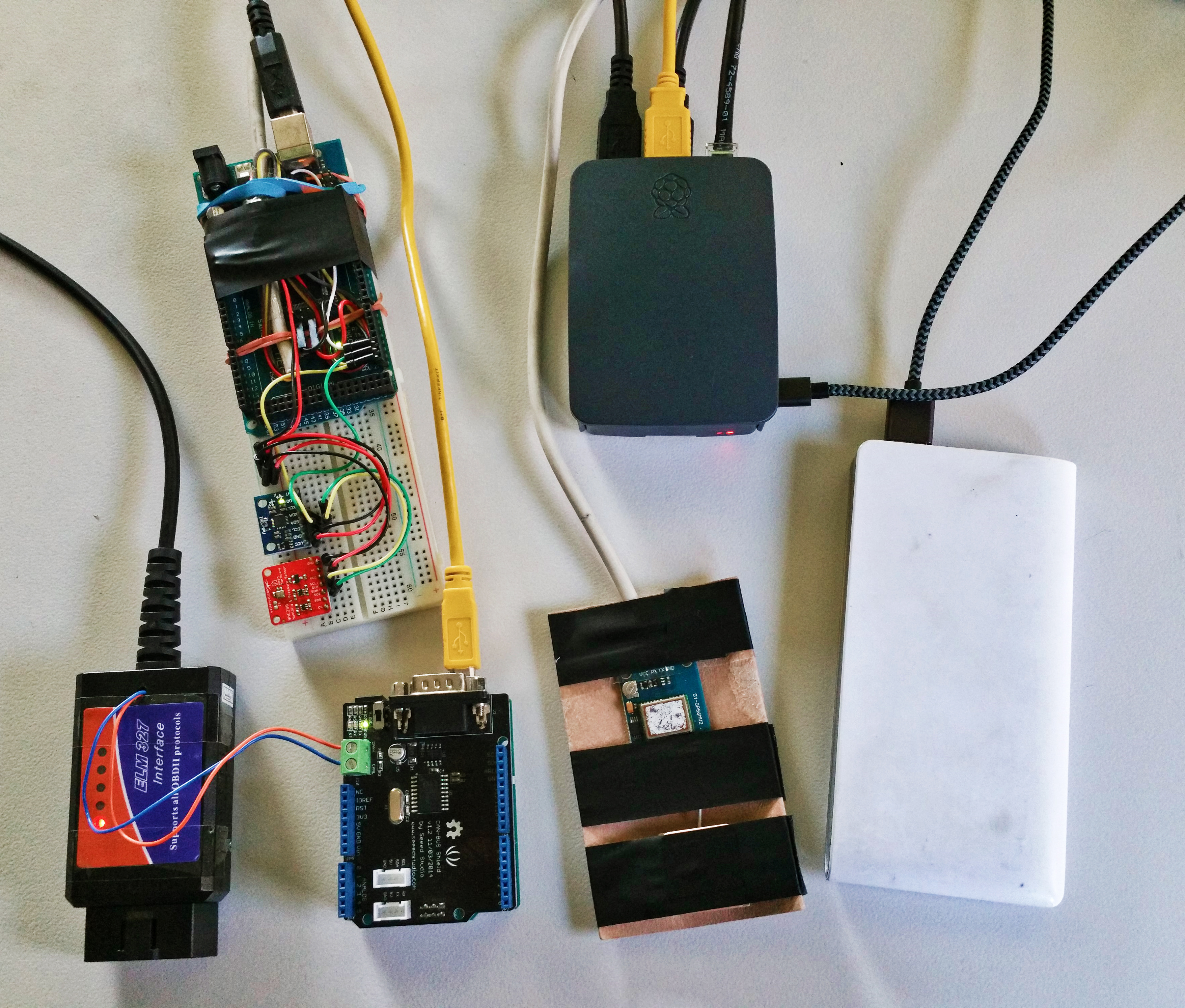 Our prototype monitoring system comprising an OBD-II Dongle, a GPS module, a CAN interface, a pressure and temperature sensor, an accelerometer, and a Raspberry Pi.

To showcase the applicability of our RDE monitor and low-cost RDE test equipment, we conducted several low-cost RDE tests with an Audi A7 TDI 200kW which is known to contain a defeat device which chokes the injected amount of urea when the urea tank is almost empty [Spiegel 2018 (German)] leading to increased NOx emissions under those circumnstances.

Audi A7 TDI 200kW with an onboard NOx sensor, prior to RDE testing.

After deploying our low-cost test equipment, we embarked on several test drives. 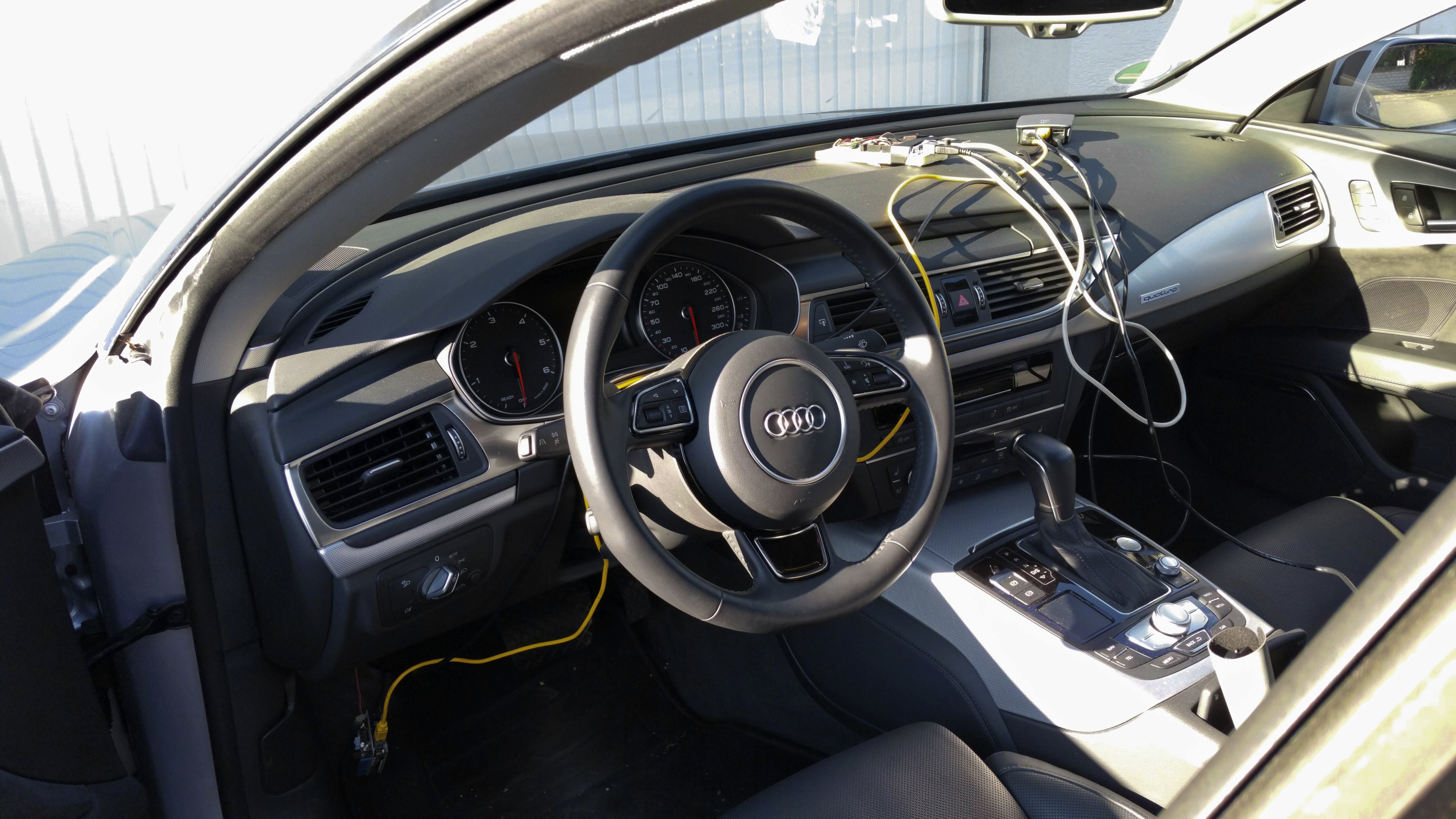 An Audi A7 200kW preperared for a low-cost RDE test.

During our tests with a full urea tank, the NOx emissions where well below the EURO 6d-TEMP emission limits of 168mg/km for RDE tests. Our monitor correctly identified our test trips as valid RDE tests and confirmed the compliance with the emission limits. However, as soon as the urea tank became almost empty, the NOx emissions increased drastically (see figure below). For those tests, our monitor complained as expected and confirmed an RDE violation.

Profiles of low-cost RDE tests with an Audi A7 3.0 TDI 200kW with full (left) and almost empty (right) urea tank.

Notably, the approval of the car is based on EURO 6b which does not stipulate emission limits for RDE tests, so legally no emission limits apply for RDE tests. Additionally, our test equipment is not comparable to a genuine PEMS when it comes to legal certification. However, the drastic relative deviation between our test runs with full and with an almost empty urea tank suggests that there indeed is a defeat device in place in our particular vehicle—especially considering the prior knowledge how the model is doped. Research about the actual precision of onboard sensors is still in progress, our results nevertheless show, that low-cost RDE monitoring and testing conducted by laypersons and using inexpensive equipment can provide exciting insights into real-world automotive exhaust emission.

Our work on formalising and effectuating emission tests in-the-wild is the first step towards low-cost hardware and open software allowing everyone to conduct RDE-like tests on public roads. Furthermore we plan to put those to use to crowdsource an answer to the question of how much of actual road traffic is recognizably not an RDE test. We feel that tests enforced by legal authorities must eventually become virtually indistinguishable from true driving behaviour so as to ultimately ban automotive software doping, i.e., software-enabled manipulations effectuated by embedded control software running in our cars.

Based on this research, we developed the Android App LolaDrives enabling laypersons to conduct RDE-like tests on their own using nothing more than their phone and a Bluetooth OBD-II dongle. For more information, we refer to the website of LolaDrives.

RTLola on Board: Testing Real Driving Emissions on your Phone
TACAS 2021. 27th International Conference on Tools and Algorithms for the Construction and Analysis of Systems, 2021.
Sebastian Biewer, Bernd Finkbeiner, Holger Hermanns, Maximilian A. Köhl, Yannik Schnitzer, and Maximilian Schwenger

This work is supported by ERC Advanced Grant 695614 (POWVER) and by the Saarbrücken Graduate School of Computer Science.

We further thank Peter Birtel, Michael Fries, and Thomas Heinze (Automotive-Labor VKM, htw saar) for fruitful discussions and for providing us with data of RDE tests performed with a genuine PEMS to validate our monitor on.